One year ago, Austin Brothers Beer Company opened its doors in Alpena. In honor of their one year anniversary, we’re taking a look back at the breweries that have called Alpena home.

Let’s start at the beginning. The first wave of European settlers came to the Alpena area in the 1850’s, followed by major settlement that began in the 1860’s and peaked in the 1880’s as lumber mills took advantage of the vast white pine forests of the area and settlers flocked to the area seeking work.

By 1884, Alpena’s population would be 9,000- and would have two breweries (in addition to numerous bottlers & saloons). Alpena Lion Brewery, located at 14th & Chisholm, claimed to be “oldest Alpena brewery.”  Alpena City Brewery, opened by Charles Brand in 1881, was located on 1st & Chisholm- next to Theatre Comique, one of Alpena’s vaudeville stages.

These breweries would come and go, as would others: 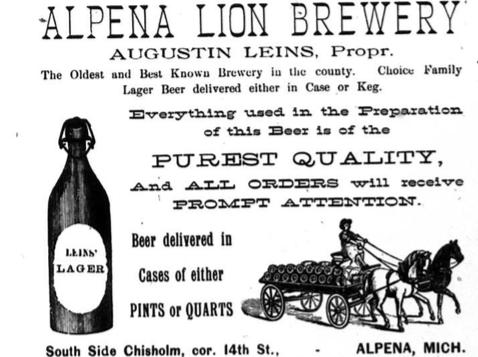 Of all Alpena brewers & bottlers, the longest-lasting– and most successful–would be John Beck. In 1887, Beck opened a brewery across the street from the Centennial Building on Chisholm. In that same year, Alpena would have an impressive 33 listed saloons- not bad for a population close to 10,000.

In 1892, a three story brick malt house would be added to the brewery on First Avenue.

In addition to his brewery, Beck was man of several enterprises in the area, including involvement in the lumber industry, a saloon on the corner of Fletcher & Dock Street  (which moved to 203 West Chisholm in 1894), and a hotel on Long Lake ( burned 1919).

Beginning as Alpena Brewing Co. in 1887, the brewery became Beck Malting and Brewing Company in 1893: the name that it would from then keep.

Despite a fire which caused $20,000 of damage in 1901 and another which destroyed the ice house in 1908, business would continue & thrive, as Beck’s became Alpena’s favorite brew.

Production would cease in 1918, as Prohibition struck the nation. After Prohibition was lifted, the brewery never reopened. The building was used for storage for many years until it was finally razed in 1957.

When in Alpena, do as the Alpenian’s do: always call for the best.

Which, now, is Alpena’s own Austin Brothers.

Information for this article came from: The Town that Wouldn’t Die (Robert Haltiner), Alpena City Directories, 1883-1920 (Alpena Public Library),  Alpena Dates of Events (Alpena Public Library), and A Complete History of Alpena County (William Boulton, 1876). Another fun fact about John Beck was that his residence, on the corner of 1st and River, was the only building to survive the Great Fire of 1872.

Blog Downtown Alpena is written by Anne Gentry. Have a question about Alpena history? Email  blogdowntownalpena@gmail.com or send a message on Facebook here.