Today, one of the most well-known pieces of art in downtown Alpena came down.

For the last thirty years, the mural on the side of the former Alpena Power Company building, located on River Street, has been a permanent fixture of the downtown Alpena landscape. As an Alpena native, I knew the mural but never knew the details. Who are these figures? When was the mural created? Who commissioned it? For such a public piece, was it part of the WPA program? Some type of advertisement?

Not quite. The mural was created in the autumn of 1989 to illustrate the history of the Fletcher family’s involvement with Alpena Power Company since its founding in 1881 by George N. Fletcher, who also served as the company’s president. He was then succeeded by successive Fletchers— Frank, Philip, Harry, Ralph, and Stephen— all featured, left to right, in the mural. On the far right, sitting in a top hat and looking over the 9th Street Dam, is Moses Brown, the engineer and contractor who designed the dam after flooding in 1881 washed it out. The depiction of Brown in the mural is based on a historic photo of him in the same position.

Linda Huggler, the artist who painted the mural, is a local Alpena native. Self-taught, she has painted other works for Alpena locations: the golf scenes at the 19th Hole, seascapes at the Dry Dock, and sets for Alpena Civic Theatre throughout the years, where she also served as president. 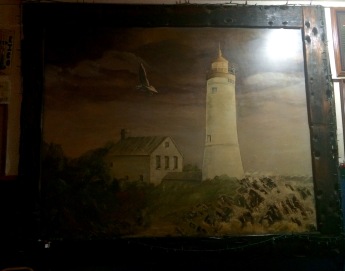 Today, the murals downtown, painted on plywood, came down. They will be put into storage until a further use or place of display is determined. Demolition of the Alpena Power Company building, currently owned by Target Alpena, is set to begin this summer and will be open for development. 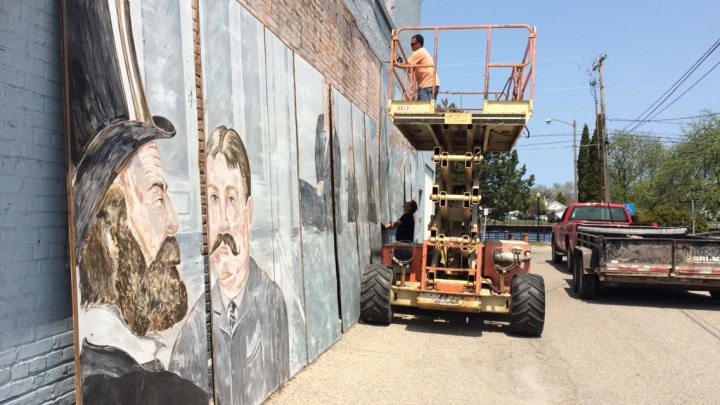 A special thank you to Bob Lingus at the Alpena Public Library’s Special Collections for providing news articles about the painting of the murals and for guiding me through the wealth of Alpena archives available at the library.

Blog Downtown Alpena is created and written by Anne Gentry in conjunction with the Alpena Downtown Development Authority. Curious about what’s going on downtown? Message me here. Also, like the page to never miss a post.