This weekend is the first ever Sunrise 45 Film Festival, happening from August 18th- 20th throughout downtown Alpena. 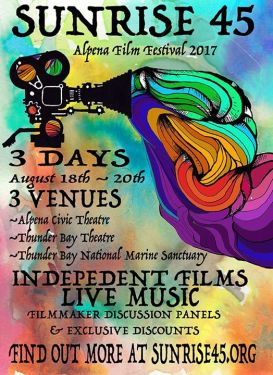 The festival, which is being organized by the group that organizes Summer Movies by the Bay, will be screening over 40 independent films from Michigan and from around the world. (Really. Submissions came from as far as India, the Netherlands, Turkey, and France, to name a few).

There’s a movie for everyone in the line-up: comedies, documentaries, experimental, animations, horror, sci-fi. A sampling of the some of the featured movies:

Full lineup & synopses of films can be found here. 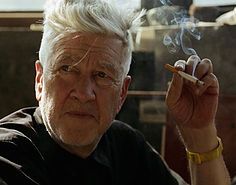 In addition to the films screenings, the festival will offer live music & special events each night, including:

Tickets can be purchased as day passes ($12-$20). A full All-Access pass for the entire festival is available for $40. The pass will also include special discounts at participating downtown restaurants & bars and a special lanyard. All-access passes can be purchased online and picked up at Neiman’s Family Market, Jimmy Garant’s, or Art in the Loft.

We hope to see you downtown during the Sunrise45 Film Festival!

Want to attend the festival but short on cash? The festival is in need of volunteers! On August 16 at 6 pm, meet at the Civic Theater to discuss assignments. Volunteers will receive a complimentary pass.